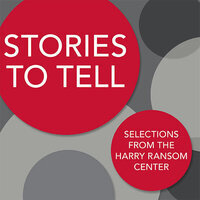 The Harry Ransom Center houses some of the world's most significant collections relating to literature, art, photography, film, and the performing arts. The Stories to Tell rotating exhibition conveys stories of inspiration, innovation, collaboration, and frustration often associated with the creative work of leading writers and artists.