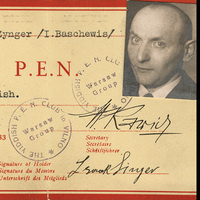 Stories to Tell: Selections from the Harry Ransom Center

The Harry Ransom Center houses some of the world's most significant collections relating to literature, art, photography, film, and the performing arts. More than 42 million manuscripts, 5 million photographs, 1 million rare books, and 100,000 artworks document our cultural history and the creative process.

Many stories can be told through the Center's collections. This rotating exhibition conveys stories of inspiration, innovation, collaboration, and frustration often associated with the creative work of leading writers and artists.