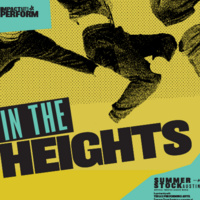 Summer Stock Austin - In the Heights

A Show About Home, Family and Finding Where You Belong.
From the creator of the Broadway Phenomenon “Hamilton,” comes the Tony-Award winning Best Musical about family, community and life in a vibrant neighborhood in New York City's Washington Heights. It tells the story of the hopes and dreams, loves and losses, and fortunes and failures of this rapidly changing community. With music and lyrics by Miranda and book by Quiara Alegria Hudes, "In The Heights" was the winner of four Tony Awards including Best Musical in 2008. This ground-breaking show weaves together Latin rhythms, hip-hop and pop to tell a story about chasing the American dream. Compared to a modern-day “Fiddler on the Roof,” this electrifying and touching story will make you believe in the power of Musical Theatre.