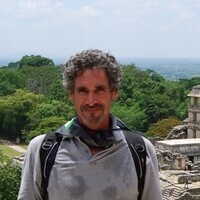 Talk by Timothy Beach, University of Texas (Reclaiming the Pre-Modern Past)

Dr. Timothy Beach, Professor in the Department of Geography and the Environment, holds the C.B. Smith, Sr. Centennial Chair in United States - Mexico Relations #2 and directs the Soils and Geoarchaeology Lab in Geography at the University of Texas at Austin. For twenty-one years, he taught at Georgetown University, where he held the Cinco Hermanos Chair and was Professor of Geography and Geoscience and Director of the STIA and Environmental Studies Programs.

He has conducted field research on soils, geomorphology, paleoecology, wetlands, and geoarchaeology in the Corn Belt of the United States, Mexico, Belize, Guatemala, Nicaragua, Syria, Turkey, Iceland, Colombia, Italy, and Germany funded by the National Science Foundation, the National Geographic Society, USAID, The University of Texas at Austin, and Georgetown University. These field seasons have been the bases for more than one hundred peer-reviewed articles and chapters and hundreds of scientific presentations around the world.  Most of his publications were on long-term environmental change, soils, paleoclimate, and geoarchaeology in the Maya world.  He was elected as a Fellow of the American Association for the Advancement of Science and awarded Guggenheim and Dumbarton Oaks Fellowships, the G.K. Gilbert Award in Geomorphology, Georgetown University’s Distinguished Research Award in 2010, Georgetown's School of Foreign Service's Faculty of the Year for Teaching Excellence in 2014, and the Carl O Sauer Award in 2017.

Free and open to the public. RSVP to reserve your seat: cmeador@austin.utexas.edu.

--
This talk is part of the IHS lecture series “Reclaiming the Pre-Modern Past," which examines how new technologies and approaches are enriching our understanding of pre-modern eras and cultures.

Sponsored by: Institute for Historical Studies in the Department of History