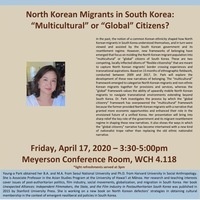 Young-a Park obtained her B.A. and M.A. from Seoul National University and Ph.D. from Harvard University in Social Anthropology. She is Associate Professor in the Asian Studies Program at the University of Hawaiʻi at Mānoa. Her research and teaching interests cover issues of post-authoritarian politics, film industry, social movements, globalization, and migration in South Korea. Her book Unexpected Alliances: Independent Filmmakers, the State, and the Film Industry in Postauthoritarian South Korea was published in 2015 by Stanford University Press. She is working on a new book on North Korean defectors’ strategies in obtaining cultural membership in the context of emergent neoliberal aid policies in South Korea.