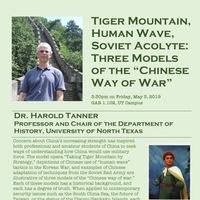 Concern about China’s increasing strength has inspired both professional and amateur students of China to seek ways of understanding how China would use military force. The model opera “Taking Tiger Mountain by Strategy,” depictions of Chinese use of “human wave” tactics in the Korean War, and examples of Chinese adaptation of techniques from the Soviet Red Army are illustrative of three models of the “Chinese way of war.” Each of these models has a historical background, and each has a degree of truth. When applied to contemporary security issues such as the South China Sea, the future of Taiwan, or the status of the Diaoyu/Senkaku Islands, each model has a function to play, but awareness of the origins of each model can help us to understand both their functions and their limitations.

Dr. Harold Tanner is Professor and Chair of the Department of History at the University of North Texas specializing in modern China. After graduating from New England College in 1983 and traveling extensively in China in 1984, Dr. Tanner earned an M.A. from the School of Oriental and African Studies at the University of London in 1985, a second B.A. in Modern Chinese from the Beijing Languages Institute in 1987, and his Ph.D. from Columbia University in 1994. His textbook China: A History (Hackett, 2009) is adopted at more than fifty colleges and universities ranging from Johnson Community College to Kenyon College to Brown University and Columbia University. Tanner’s most recent work, Where Chiang Kai-shek Lost China: The Liao-Shen Campaign, 1948 (Indiana University Press, 2015) focuses on the interaction of Chinese Communist and Nationalist forces on the ground in Manchuria and U.S. diplomacy in Washington and Nanjing in one of the key military engagements of the Chinese Civil War (1945-1959). Dr. Tanner has done presentations on Chinese political and military history and strategic culture to audiences at the Hoover Institution, the Society for Military History, the United States Army’s annual People’s Liberation Army Conference, the Chinese Academy of Social Sciences, and the U.S. Seventh Fleet Naval Reserve.