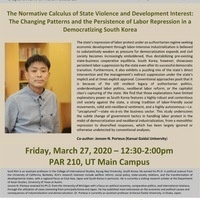 Canceled: Talk: The Normative Calculus of State Violence and Development Interest: The Changing Patterns and the Persistence of Labor Repression in a Democratizing South Korea

The state’s repression of labor protest under an authoritarian regime seeking economic development through labor-intensive industrialization is believed to substantively weaken as pressure for democratization expands and civil society becomes increasingly emboldened, thus destabilizing pre-existing state-business cooperative equilibria. South Korea, however, showcases persistent labor suppression by the state even after its successful democratic transition. Furthermore, it also exhibits a puzzling mix of the state’s direct intervention and the management’s indirect suppression under the state’s implicit and at times explicit approval. Conventional approaches posit that it is because of the still resilient legacy of authoritarian politics, underdeveloped labor politics, neoliberal labor reform, or the capitalist class’s capturing of the state. We find that those explanations have limited explanatory power as South Korea features a highly robust and contentious civil society against the state, a strong tradition of labor-friendly social movements, solid anti-neoliberal sentiment, and a highly autonomous—i.e. “uncaptured”—state vis-à-vis the business sector. This study underscores the subtle change of government tactics in handling labor protest in the midst of democratization and neoliberal industrialization, from a monolithic repression to diversified responses, which has been largely ignored or otherwise undetected by conventional analyses.

Sunil Kim is an assistant professor in the College of International Studies, Kyung Hee University, South Korea. He earned his Ph.D. in political science from the University of California, Berkeley. Kim’s research interests include welfare reform, social policy, state-society relations, and the transformation of developmental states, with a regional focus on East Asia, Japan and South Korea in particular. He is currently a visiting research scholar at the Department of Asian Studies, University of Texas at Austin.

Jonson N. Porteux received his Ph.D. from the University of Michigan with a focus on political economy, comparative politics, and international relations, through the utilization of cases stemming from principally Korea and Japan. He has published most extensively on the economic and political causes and consequences of industrialization and democratization. Dr. Porteux is currently an assistant professor at Kansai Gaidai University, in Osaka, Japan.