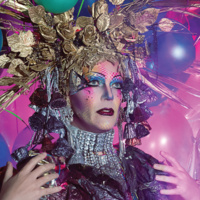 Playwright, actor, singer-songwriter, performance artist, director, producer, and “Critical darling of the New York Scene” (New York Magazine), Taylor Mac has performed in hundreds of venues across the globe. Named “one of the most exciting theater artists of our time” by Time Out New York, Mac creates extravagant performance events that provoke and embrace diverse audiences. Taylor Mac will escort you through an abridged version of this epic piece that was originally performed as a one-time 24-hour event and was recognized on The New York Times 2016 lists of Best Performances, Best Theater, and Best Music. A 24-Decade History of Popular Music (Abridged) interprets the social history of the United States—all 240 years and counting—through popular songs ranging from murder ballads to disco, Walt Whitman to David Bowie, and beyond. The show is a dazzling experience that reflects our nation’s diverse and sometimes dysfunctional story so as to bolster a uniquely American sense of possibility.