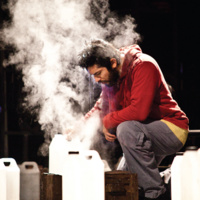 Amarillo tells the story of a man who departs Mexico for a land of dreams: Amarillo, Texas—but vanishes before reaching his destination. Far away, a woman reconstructs his journey, imagining what might have transpired not only for him, but for the other thousands of faceless men and women who have taken the same path—and for those who were left behind. Combining stunning multimedia projections, visceral imagery, and poetic storytelling, this renowned theater company from Mexico City creates a rich, poignant meditation on the harsh realities faced by immigrants and their families. Amarillo is performed in Spanish with projected English surtitles.