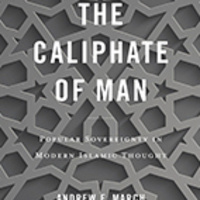 The Caliphate of Man: The Invention of Popular Sovereignty in Modern Islamic Thought

On Monday, October 14, 2019, Dr. Andrew March, Associate Professor of Political Science at UMass Amherst, will give a talk as part of the Strauss Center's Brumley Speaker Series.

Dr. March's talk will focus on modern Islamic political thought and how it is quintessentially characterized by the commitment to divine sovereignty in politics and legislation. Even in the most theocratic of Islamist thinkers there are explicit commitments to a kind of popular political agency and responsibility. What are the origins in modern Islamist thought of the commitment to popular sovereignty? What does it mean to hold that both God and the people can be said to be “sovereign” and what unresolved paradoxes remain at the level of theory (with all due respect for the way in which such tensions are negotiated in the legislative and judicial spheres)? Which specific aspects or powers of sovereignty are the “people” said to enjoy? Are they fully sovereign powers or are they said to be constrained? What are the implications for traditional conceptions of the divine law and those agents who claimed to speak for it? What kind of “people” is imagined to be sovereign, what are the conditions for it to claim this authority, and how is this sovereignty represented and enacted? This talk, based on a forthcoming book manuscript, explores the meaning of popular sovereignty in modern Islamic thought through the ubiquitous political theological claim that the political representation of God has devolved universally onto “the people” – a doctrine that Dr. March refers to as “the caliphate of man.”

Andrew F. March is Associate Professor of Political Science at the University of Massachusetts, Amherst. His research and teaching interests are in the areas of political philosophy, Islamic law and political thought, religion, and political theory. He is a graduate of the University of Pennsylvania and the University of Oxford, where he studied as a Marshall Scholar. His book, Islam and Liberal Citizenship (Oxford University Press, 2009), is an exploration of the Islamic juridical discourse on the rights, loyalties, and obligations of Muslim minorities in liberal politics, and won the 2009 Award for Excellence in the Study of Religion from the American Academy of Religion. He has published articles on religion, liberalism, and Islamic law in, amongst other publications, the American Political Science Review, Philosophy & Public Affairs, Journal of Political Philosophy, European Journal of International Law, and Islamic Law and Society. His new book, The Caliphate of Man (Belknap/Harvard University Press, 2019), explores the problem of divine and popular sovereignty in modern Islamic thought.