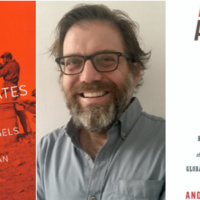 The U.S. Civil War gave new scope to revolutionary currents that ran through the Mississippi River Valley, between St. Louis and New Orleans.  This talk focuses on two of the most powerful: African American Conjure and European American Communism. These occult plebeian powers challenged the national ontology of U.S. exceptionalism and the despotism of white supremacy and private property that it entailed. Drawing on Stefano Harney and Fred Moten’s 2013 The Undercommons, this talk highlights the intellectual and political work of the self-emancipation enslaved people in the United States.

Andrew Zimmerman is Professor of History and International Affairs in the Columbian College of Arts & Sciences at The George Washington University. He studies revolutions, political thought, imperialism and capitalism. Originally a historian of Germany and Europe, his geographical focus now also includes the United States and West Africa. His teaching and research explore decolonizing approaches to history, including transnational archival research and the use of social and political theory.

His recent research has focused on the global history of the US Civil War, Reconstruction, and the New South. He is the author of Alabama in Africa: Booker T. Washington, the German Empire, and the Globalization of the New South (Princeton, 2010) and the editor of Karl Marx and Friedrich Engels, The Civil War in the United States (International Publishers, 2016). He is currently writing a history of the Civil War as an international working-class revolution with roots in Europe, Africa, and the Caribbean. It will be called “A Very Dangerous Element.” His first book, Anthropology and Antihumanism in Imperial Germany (Chicago, 2001), studied imperialism, science, and popular culture. His scholarship has been supported by organizations including the American Council of Learned Societies, the Guggenheim Foundation, and the Institute for Advanced Study in Princeton. Many of his publications can be found here.

Free and open to the public. RSVP required to cmeador@austin.utexas.edu by Sep. 20, at 10am, to sign-up to attend. Light lunch provided to all who RSVP. The Institute for Historical Studies is committed to sustainable practices and minimizing waste. To that end, we ask that you inform us in your RSVP if you will not require lunch.  In addition, we have eliminated all bottled water and encourage attendees to bring their own reusable canteens to fill at our first-floor bottle-refilling station.