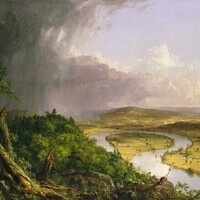 “A way a lone a last a loved a long a…riverrun, past Eve and Adam’s, from swerve of shore to bend of bay…” Thus, James Joyce ends and begins his stream of consciousness masterpiece, Finnegans Wake, a round river of language which flows back into itself, in which he weaves the names of hundreds of rivers in the Anna Livia Plurabelle or "river" chapter. In Western literature, rivers and streams are used as both whimsical - Wind in the Willows - and frightening – The Heart of Darkness – settings for river tales. For American art, rivers and flowing water have been central to the development of distinctive American art. In American visual arts, rivers played a key role for American painting beginning with the river valley landscapes of the Hudson River School in the 1820s. The river master of American literature is Mark Twain whose greatest books focus on his river, the Mississippi, but, before Twain, Henry David Thoreau wrote his first book about the Concord and Merrimack Rivers. So join us for a talk that will meander through the sinuous landscape of language, art and waterways.