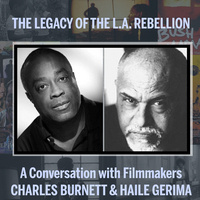 The Legacy of the L.A. Rebellion: A Conversation with Filmmakers Charles Burnett & Haile Gerima

In the 1970s, a group of talented African-American filmmakers from UCLA created the first sustained alternative cinema that focused on the realities of Black America. The movement became known as the L.A. Rebellion,

The UT community is invited to join the Zoom webinar, which will stream to the general public via YouTube.

Before the talk, we highly recommend that everyone watch seminal films by our guests. Here are two you can stream: