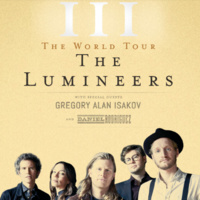 The Lumineers announced the addition of more dates to the epic arena tour celebrating their landmark album, “III,” including a stop at the Frank Erwin Center on Sept. 18 with Gregory Alan Isakov and Daniel Rodriguez as support. Since being released, “III” has topped a slew of charts including “Top Current Album,” “Top Independent Album,” “Top LP Album,” “Top Digital Album,” “Alternative Albums,” “Americana Albums” and “Rock Albums.”