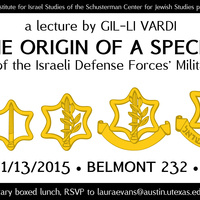 "The Origin of a Species: The Birth of the Israeli Defense Forces' Military Culture" A Lecture by Gil-li Vardi

Please join the Institute for lunch as we hear from Gil-li Vardi as she discusses Israel's defense forces and how they have developed a military culture over time. A complimentary lunch will be provided with an RSVP to Laura Evans.

The Israeli Defense Force (IDF) is known for, and prides itself in, being an offensive, daring, highly effective and initiative-driven army. These qualities have facilitated its many operational successes over decades. But how did the IDF come to possess them? Lessons from the past, translated into practice, are the foundations upon which armies develop habits and taken-for-granted tendencies. Tradition shapes decisions and patterns of behavior and turns them into ‘natural’ organizational reactions. The IDF, however, had no habituated tradition to fall back on during its early years; it emerged in an organizational “big bang” moment. The IDF’s early history therefore provides a rare glimpse into the birth of an organizational culture, and into the dynamics that set the Israeli Army’s future trajectory - leading to success and failures alike.
​
Gil-li Vardi is a research fellow at CISAC and lecturer in the History Department and the Graduate School of Business, Stanford. She earned her PhD at the London School of Economics, and spent two years as a research fellow at the Leverhulme Programme on the Changing Character of War at the University of Oxford. Before coming to Stanford she was a J. P. Moran Family Assistant Professor of Military History at Notre Dame University. Her research examines the interplay between organizational culture, doctrine, and operational patterns in military organizations, and focuses on the incentives and dynamics of change in military thought and practice.