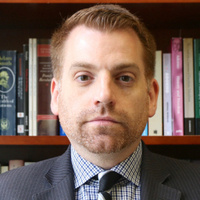 "The Politics of Empire at the Accession of George III" book talk by James M. Vaughn, Department of History

The Politics of Empire at the Accession of George III:
The East India Company and the Crisis and Transformation of Britain's Imperial State (Yale University Press, February 2019)

In this bold debut work, historian James M. Vaughn challenges the scholarly consensus that British India and the Second Empire were founded “in a fit of absence of mind.” He instead argues that the origins of the Raj and the largest empire of the modern world were rooted in political conflicts and movements in Britain. It was British conservatives who shaped the Second Empire into one of conquest and dominion, emphasizing the extraction of resources and the subjugation of colonial populations.

Drawing on a wide array of sources, Vaughn shows how the East India Company was transformed from a corporation into an imperial power in the service of British political forces opposed to the rising radicalism of the period. The Company’s dominion in Bengal, where it raised territorial revenue and maintained a large army, was an autocratic bulwark of Britain’s established order. A major work of political and imperial history, this volume offers an important new understanding of the era and its global ramifications.

James Vaughn earned his Ph.D. at the University of Chicago in 2009, and is currently an Assistant Professor in the Department of History and the Assistant Director of the British Studies Program at the University of Texas at Austin. His research interests lie in the history of Britain and the British Empire in the later seventeenth, eighteenth, and nineteenth centuries. Dr. Vaughn's edited volume with Robert Olwell, Envisioning Empire: The New British World from 1763 to 1773, will be published by Bloomsbury this November. He is currently working on a new project that reinterprets the Age of Revolution in the Atlantic world and the origins of liberal democracy.

"Why did the British empire change in the later eighteenth century from one predominantly of liberty to one predominantly of authority and control? James Vaughn's book is a most ambitious attempt to resolve this great problem. All scholars will in future have to pay close attention to his findings."
- P. J. Marshall, author of The Making and Unmaking of Empires

"Carefully researched and argued, this courageous book brings the radical Whigs and imperialism into sharp focus. The emphasis on capitalism and bourgeois ideology unapologetically reminds us of the British Marxists, a correction long overdue. Let the debate begin!"
- Margaret C. Jacob, author of The Radical Enlightenment

“This is an immensely important work which will have a powerful and contentious impact. Vaughn takes a fresh approach and lays out a persuasive case which will make his work a clear leader in its field."
-Allan MacInnes, University of Strathclyde

Please RSVP to cmeador@austin.utexas.edu to reserve your seat and receive a copy of the reading selection to be discussed. This discussion is part of the IHS' History Faculty New Book Talk Series.

Sponsored by: Institute for Historical Studies in the Department of History; Center for European Studies