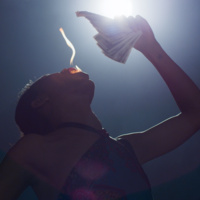 This film by The Propeller Group, an artist collective based in Vietnam and California, combines actual footage and staged portrayals of Vietnamese funeral rituals that shift dramatically from documentary to poetic. Music plays a significant role in the narrative trajectory, beginning with Vietnamese instrumentation and concluding with a New Orleans-style brass band, establishing unexpected continuities between South Vietnam and Louisiana Gulf Coast traditions. Despite the somber context, the film captivates with the inclusion of mysterious symbols and performers, including an ox skull, fire breathers, and a snake charmer.