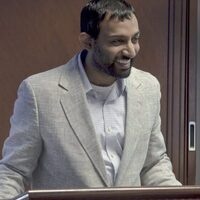 The Sacrifice: The Story of Abraham’s/Ibrahim’s Sacrifice and Its Relevancy Today

This talk will examine the Biblical and Qur’anic story of Abraham’s/Ibrahim’s sacrifice. It will begin by highlighting the multiple exegesis of the verses, such as whether Isaac/Ishaq or Ishmael/Isma‘il was the intended sacrifice and the various evidences for the competing claims. We will then transition to learn how the story remains relevant within current interfaith initiatives which often claim Abraham as a unifying figure. The term "Abrahamic" is often a way to include Muslims and as alternative to "Judeo-Christian". However, recent critiques have emphasize that Abraham is understood differently within each religion and that we should respect the theological boundaries between religious groups. We will also consider how the story remains relevant within our current political discourse. Claims to "sacrifice" and, in particular, "sacrifice" to the nation are often modeled after the Biblical and Qur'anic Sacrifice story and give legitimacy to candidates who attempt to demonstrate their loyalty and sincerity to their political base.

Dr. Younus Y. Mirza is a Visiting Researcher at Georgetown University and Scholar in Residence at Shenandoah University.  He defended his dissertation in Arabic and Islamic Studies from Georgetown University in 2012  and has taught at Millsaps and Allegheny Colleges.  His current research focuses on the relationship between the Bible and the Qur’an and the shared stories between them. He is a co-author of the book The Bible and the Qur’an: Biblical Figures in the Islamic Tradition and has published in various journals such as the Journal of the American Academy of Religion (JAAR), the Journal of Qur’anic Studies (JQS) and Islam Christian-Muslim Relations. He teaches courses on the Qur’an, Islamic Movements, Biblical and Qur’anic Prophets, Marriage and Sexuality in Islam and Islam and Other Religions.  His writings can be accessed here.