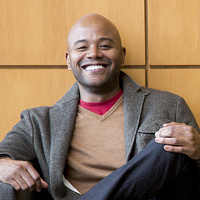 "The Sword and the Shield: The Revolutionary Lives of Malcolm X and Martin Luther King Jr.," book talk by Dr. Peniel E. Joseph

The Sword and the Shield: The Revolutionary Lives of Malcolm X and Martin Luther King Jr.
(Basic Books, 2020)

A book talk and discussion with
Peniel E. Joseph
Barbara Jordan Chair in Ethics and Political Values, LBJ School of Public Affairs,
Professor of History, and
Founding Director Center for the Study of Race and Democracy
The University of Texas at Austin
https://liberalarts.utexas.edu/history/faculty/pej335

This dual biography of Malcolm X and Martin Luther King upends longstanding preconceptions to transform our understanding of the twentieth century’s most iconic African American leaders.

To most Americans, Malcolm X and Martin Luther King Jr. represent contrasting ideals: self-defense vs. nonviolence, black power vs. civil rights, the sword vs. the shield. The struggle for black freedom is wrought with the same contrasts. While nonviolent direct action is remembered as an unassailable part of American democracy, the movement’s militancy is either vilified or erased outright. In The Sword and the Shield, Peniel E. Joseph upends these misconceptions and reveals a nuanced portrait of two men who, despite markedly different backgrounds, inspired and pushed each other throughout their adult lives. This is a strikingly revisionist biography, not only of Malcolm and Martin, but also of the movement and era they came to define.

"Mr. Joseph, a history professor at the University of Texas at Austin, weaves [Martin Luther King Jr. and Malcolm X's] stories fluidly and with vivid detail, helping to strip away the high gloss of mythology."
—Wall Street Journal

"It is a fascinating story, full of subtle twists and turns."—Washington Post
"As the author delineates the philosophies and tactics of each man, he compares and contrasts them on nearly every page, making the various narrative strands cohere nicely. An authoritative dual biography from a leading scholar of African American history."
—Kirkus

Peniel Joseph holds a joint professorship appointment at the LBJ School of Public Affairs and the History Department in the College of Liberal Arts at The University of Texas at Austin. He is also the founding director of the LBJ School's Center for the Study of Race and Democracy (CSRD). His career focus has been on "Black Power Studies," which encompasses interdisciplinary fields such as Africana studies, law and society, women's and ethnic studies, and political science.

Prior to joining the UT faculty, Dr. Joseph was a professor at Tufts University, where he founded the school's Center for the Study of Race and Democracy to promote engaged research and scholarship focused on the ways issues of race and democracy affect people's lives.

In addition to being a frequent commentator on issues of race, democracy and civil rights, Dr. Joseph's most recent book is The Sword and the Shield: The Revolutionary Lives of Malcolm X and Martin Luther King Jr.. He also wrote the award-winning books Waiting 'Til the Midnight Hour: A Narrative History of Black Power in America and Dark Days, Bright Nights: From Black Power to Barack Obama. His book Stokely: A Life has been called the definitive biography of Stokely Carmichael, the man who popularized the phrase "black power." Included among Joseph's other book credits is the editing of The Black Power Movement: Rethinking the Civil Rights-Black Power Era and Neighborhood Rebels: Black Power at the Local Level.

The event will be hosted virtually via Zoom. Register in advance for this Zoom event at:
https://utexas.zoom.us/webinar/register/WN__JyHLdywRSuGlDimIIiqIw

This discussion is part of the History Faculty New Book Talk Series.