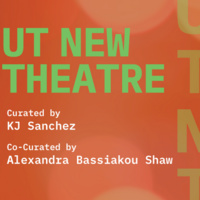 Three Shitty Sons is the story of three shitty sons who love the holidays, and in other news, they want their mother to hurry up and die already. Meanwhile, a frustrated narrator finds ways to insert herself into the family's dysfunction. This disheveled comedy is an homage to Our Town's theatrical examinations of life and afterlife.

The running time for Three Shitty Sons is 90 minutes with no intermission.

Contains some mature content and mention of suicide and murder.

College of Fine Arts, Department of Theatre and Dance