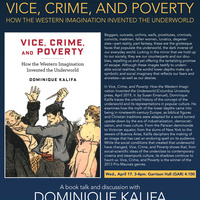 "Vice, Crime, and Poverty: How the Western Imagination Invented the Underworld" Book Talk by Dominique Kalifa, University of Paris 1, Panthéon–Sorbonne

Beggars, outcasts, urchins, waifs, prostitutes, criminals, convicts, madmen, fallen women, lunatics, degenerates—part reality, part fantasy, these are the grotesque faces that populate the underworld, the dark inverse of our everyday world. Lurking in the mirror that we hold up to our society, they are our counterparts and our doubles, repelling us and yet offering the tantalizing promise of escape. Although these images testify to undeniable social realities, the sordid lower depths make up a symbolic and social imaginary that reflects our fears and anxieties—as well as our desires.

In Vice, Crime, and Poverty: How the Western Imagination Invented the Underworld (Columbia University press, April 2019, tr. by Susan Emanuel), Dominique Kalifa traces the untold history of the concept of the underworld and its representations in popular culture. He examines how the myth of the lower depths came into being in nineteenth-century Europe, as biblical figures and Christian traditions were adapted for a world turned upside-down by the era of industrialization, democratization, and mass culture. From the Parisian demimonde to Victorian squalor, from the slums of New York to the sewers of Buenos Aires, Kalifa deciphers the making of an image that has cast an enduring spell on its audience. While the social conditions that created that underworld have changed, Vice, Crime, and Poverty shows that, from social-scientific ideas of the underclass to contemporary cinema and steampunk culture, its shadows continue to haunt us. Vice, Crime, and Poverty is the winner of the 2013 Prix Mauvais genres.

Dominique Kalifa is one of the best French cultural historians of his generation and a worthy successor to Alain Corbin at the Sorbonne. Vice, Crime, and Poverty examines the urban ‘underworld,’ not in the twentieth-century sense of organized crime but as an imaginary shaped discursively in the nineteenth century by a widespread if morbid fascination with the apparent dangers of urban life.Edward Berenson, author of Europe in the Modern World

This is a lively and fun read. More than tracing the evolution of living conditions of the poor and indigent, Vice, Crime, and Poverty also represents an important contribution to the histoire des mentalités, telling us how different eras viewed the poor in terms of social changes at those times. The transnational aspect greatly enhances this study, making it a significant contribution to the field by offering insights into both European and American history.Venita Datta, author of Heroes and Legends of Fin-de-Siècle France: Gender, Politics, and National Identity

Kalifa is the leading historian still teaching and writing about modern French history in France. In Vice, Crime, and Poverty, he shows how the lowest of the lower classes came to be represented by, or analogized with, indigenous colonized peoples. He offers interesting reflections on the successors of the inhabitants of the bas-fonds and the emergence of new designations for them, along with the internationalization of crime. Yet again, Kalifa provides much to discuss.John Merriman, author of Ballad of the Anarchist Bandits: The Crime Spree that Gripped Belle Epoque Paris

Dominique Kalifa is a historian and professor at the University of Paris 1 Panthéon–Sorbonne, where he heads the Center of 19th Century History. His work focuses on the history of crime, social control, and mass culture in 19th- and early 20th-century France and Europe. He wrote the first book on the private detective métier, published in 2000 as Naissance de la police privée, and is a member of the Historical Committee of the City of Paris. Since 1990, he has been a literary contributor to Libération.

Sponosred by Institute for HIstorical Studies in the Department of History, Center for European Studies, and Department of French and Italian.