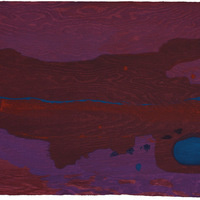 Without Limits: Helen Frankenthaler, Abstraction, and the Language of Print

A key figure in the development of color-field painting, Helen Frankenthaler (1928–2011) was a tireless experimenter with color, form, and technique over the course of her life. When Frankenthaler began creating prints in 1961, she had to adapt to a medium that would involve collaboration and a new language of printmaking techniques. Asking questions that began, ‘Suppose I do…’ or ‘Suppose I try…’ she approached lithographs, screenprints, etchings, and woodcuts with curiosity and vision. She, along with other artists, contributed to a printmaking renaissance in the mid-20th-century. This exhibition celebrates the generous gift from the Helen Frankenthaler Foundation of ten prints and six proofs that span five decades of the artist’s career. Her work is joined by that of other artists in the Blanton Museum of Art’s collection using the medium of print to capture and translate their own abstract visions.