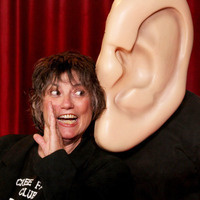 "You Are My Sunshine" Performance by Terry Galloway

Terry Galloway spent years living in silence. Until she got cochlear implants. “You are my Sunshine” is her comic, sometimes moving, sometimes profane exploration of her rebirth into the world of sound.

On Wednesday, March 6, the Moody College of Communication will host the multitalented performer, writer and activist for a special performance of “You Are My Sunshine”, directed by Donna Marie Nudd, followed by a Q&A.

Galloway is a writer, director and performer for stage, radio, video and film. She is a co-founder of Austin’s legendary Esther’s Follies as well as Actual Lives Austin, an activist theatre for adults with disabilities. Among her many honors and awards, she has been a nominee for the Alpert Award in the Arts, a Heckscher Fellow at Columbia University, a J. Frank Dobie Fellow from the Texas Institute of Letters, visiting artist at the California Institute of the Arts and the University of Texas at Austin, and winner of grants from the Kennedy Center and the National Endowment for the Arts.

In 1986, she co-founded with her wife Donna Marie Nudd the Mickee Faust Theatre for the Really Dramatic Arts, a non-profit theater for the queer, disabled, minority community that teaches novices the art of writing, performing and producing original cabarets, radio shows and short comic videos. Her 2009 memoir, Mean Little Deaf Queer, was a finalist for the Lambda Award and lauded by Dorothy Allison as “a damn fine piece of work that is unbelievably powerful.”