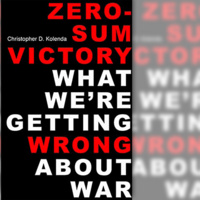 Zero-Sum Victory: What We're Getting Wrong About War

On Wednesday, December 1, the Clements Center will host Chris Kolenda, Founder of the Strategic Leaders Academy, for a book talk on his upcoming release Zero-Sum Victory: What We're Getting Wrong About War. Join us at 12:15 pm CST. Location TBD. Registration required.

Founder of the Strategic Leaders Academy, Chris has helped small businesses and nonprofits grow by over $27 million and counting. He works with leaders who want to take their businesses to new heights using the right clarity, team, and strategy.

Chris is a West Point graduate, internationally renowned combat leader, retired Army Colonel, trusted adviser to two Defense Secretaries and three 4-star generals, business leader, and author of Leadership: The Warrior’s Art — which has sold over 50,000 copies. He has appeared on CNN, MSNBC, BBC, NPR, The Wall Street Journal, The Economist, The New York Times, and The Washington Post. His battlefield leadership has been featured in several books, including Jake Tapper’s bestseller The Outpost.